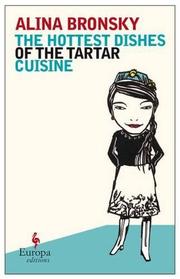 THE HOTTEST DISHES OF THE TARTAR CUISINE

The fictional memoirs of Rosalinda Achmetowna, a Tartar Tiger Mother who ruins the lives of her family across several generations, and up to the end fails to realize her toxic influence.

The narrative begins with the pregnancy of Rosa’s daughter Sulfia, whom her mother (albeit with good reason) considers egregiously stupid. Rosa tries to abort the pregnancy with a knitting needle, but it turns out Sulfia was supposed to have had twins, and one, Aminat, survives. This granddaughter becomes the proverbial apple of Rosa’s eye, and Rosa tries to groom her for success. The grandmother takes over supervision of her education, hitting Aminat and withholding affection when she’s less than perfect—which it so happens is much of the time. (Typical of their interaction is Rosa’s promise to Aminat that if she agrees to certain behaviors for three months, Rosa will get her a cat. Aminat is compliant, and they go to a city market to get the cat, but when a vendor wants to charge a high price, the grandmother refuses to pay.) Rosa is saddled with an atrociously useless husband, Kalganow, and Sulfia goes from one foundering marriage to another, picking up another pregnancy along the way (though this granddaughter, Lena, Rosa finds unacceptably ugly because she’s not a Tartar). Rosa finally finds a way out of Russia by latching onto Dieter, a disreputable German who is supposedly writing a book on Tartar cuisine. Eventually, Aminat escapes the clutches of her grandmother and achieves a limited flicker of success on a German version of American Idol.

A darkly humorous novel with sharp observations about the machinations of a monstrous mother.