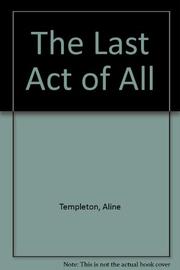 THE LAST ACT OF ALL

A shattered actress beauty is claimed by her second husband after serving time for the murder of her divorced first, a schizoid TV star. In flashback, Helena Fielding describes the decay of her marriage to Neville Fielding, who had taken to imitating the brutal ``Harry Bradman'' of his series scripts. Neville manipulated and alienated the natives of ugly, isolated Radnesfield, where he'd bought a manse, and drove Helena into the recuperative embrace of gentle Edward Radley, a son of the gentry from whom Neville had bought the mansion. When Neville announced he was selling Radnesfield to developers, he was murdered. Innocent Helena pled guilty to protect her teenaged daughter; upon her release, however, she became vulnerable to the true killer. At this point, Sgt. Frances Howarth reopens the case, takes over the narrative and- -following some sex-role banter with her male boss and a second murder—traces the real culprit at the heart of Radnesfield. British author Templeton's first US appearance tries both psychological reminiscence and—changing horses—feminist-trendy procedural but to confused effect. The logic bends under pressure, and the murderer can be spotted practically on introduction.