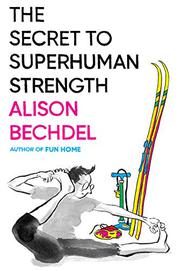 THE SECRET TO SUPERHUMAN STRENGTH

The acclaimed graphic memoirist returns to themes of self-discovery, this time through the lens of her love of fitness and exercise.

Some readers may expect Bechdel to be satisfied with her career. She was the 2014 recipient of a MacArthur Fellowship, and her bestselling memoirs, Fun Home and Are You My Mother? both earned universally rave reviews, with the former inspiring a Broadway musical that won five Tony awards. But there she was, in her mid-50s, suffering from “a distinct sense of dread” and asking herself, “where had my creative joy gone?” Ultimately, she found what she was seeking, or at least expanded her search. In what she calls “the fitness book,” the author recounts, from her birth to the present, the exercise fads that have swept the nation for decades, from the guru-worship of Charles Atlas and Jack LaLanne through running, biking, hiking, “feminist martial arts,” yoga, and mountain climbing. “I have hared off after almost every new fitness fad to come down the pike for the last six decades,” she writes. Yet this book is about more than just exercise. Bechdel’s work always encompasses multiple interlocking themes, and here she delves into body image; her emerging gay consciousness; the connection between nature and inner meaning; how the transcendentalists were a version of the hippies a century earlier; and how her own pilgrimage is reminiscent of both Margaret Fuller and Jack Kerouac, whose stories become inextricably entwined in these pages with Bechdel’s. The author’s probing intelligence and self-deprecating humor continue to shimmer through her emotionally expressive drawings, but there is so much going on (familial, professional, romantic, cultural, spiritual) that it is easy to see how she became overwhelmed—and how she had to learn to accept the looming mortality that awaits us all. In the end, she decided to “stop struggling,” a decision that will relieve readers as well.