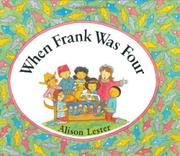 WHEN FRANK WAS FOUR

A brilliantly conceived book about seven children, consisting entirely of variations on the same phrase: ``When Nicky was one she spilled spaghetti on her head. Frank bit the dog. Tessa took her first steps . . . And Rosie said `Horse.' '' A small scene of each event appears above the line of text. On the next page, accompanied by a full-page illustration, is a screwy sort of punchline, e.g., ``But Clive smashed the china at his Great Grandmother's birthday party.'' For each of the next six years, the same pattern is repeated, with a different character leading off, and a different one delivering the punchline. The captions are wonderfully turned miniatures, simultaneously simple and inventive. Most of the time the text and pictures are hilarious, and even when the text is not explicitly funny, the picture makes it so. Lester (Yikes!, 1995, etc.) provides her characteristic watercolors, depicting irresistibly independent children in ever-changing sequence; perhaps her books should never be fully absorbed in just one sitting. A counting/memory game closes the book; the entire venture is unique in design and executed to perfection. (Picture book. 2-8)