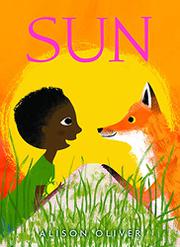 A boy named Sun has a close encounter with a fox.

In this immensely appealing fantasy, the minimalist text takes a back seat to the boldly colorful illustrations. The central figure is Sun, a young boy who is introduced as a “soccer star.” But this picture book is not about soccer—it’s rather about Sun’s awareness that “something was missing.” Observing that his younger brother, Pablo, “looked happy” while “making art,” Sun heads for the beach, recalling that “he used to make art too.” Awaiting Sun are an unexpected encounter with a fox and a rekindling of his creativity, expressed in an explosion of collage-style montages. The spread in which the fox shows Sun how to make art is a fabulously messy composition, colorful scrawls and squiggles in the background recalling Pablo’s exuberant experimentation on the walls even as Sun and the fox build sculptures out of found objects. Feeling “connected” at last, Sun notices that the day is drawing to a close and returns to an undefined “home” (sans parents), where he and Pablo explore their creativity together in a space that has the look of the outdoors but with those vigorous, unbridled scrawls and squiggles again on a blue-sky backdrop. The soccer-themed introduction feels superfluous, as the not-so-subtle message concerns the magic of art and nature. Both boys have dark brown skin and textured black hair.

A visual treat for the young imagination