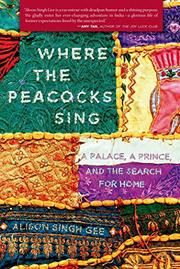 WHERE THE PEACOCKS SING

A Palace, a Prince, and the Search for Home

In this coming-of-age memoir, Los Angeles–based journalist Gee examines her transformation from social-climbing material girl to loving mother after falling in love with a fellow journalist.

Born into a middle-class Chinese-American family, the author gleaned early on from her father’s losing battle with his financially obsessed brothers that material wealth paved the way to happiness. “All my life I had gotten the message that ‘making it’ meant being rich, pampered, and beautiful,” she writes. So she left the States after college to pursue her dream of “making it” as a features writer in Hong Kong, where she sparkled among the glitterati while being doted on by a British fund manager. But the trappings of that “swish, fragrant existence” began to lose their luster when the author met her husband-to-be, Ajay Singh, a “kind, handsome soulful man” who, after brief workplace encounters, wooed her from his home in India through old-fashioned correspondence. Six months after moving to Hong Kong to be with Gee and their subsequent engagement, Singh revealed that his family still lived in the childhood home built by his great-grandfather at the turn of the 20th century. Though having expressed no prior interest in meeting her future in-laws, within weeks of her fiance’s revelation, she sought to visit the “grand hundred-room” outside New Delhi. While much of the memoir’s narrative focuses on the reconciliation of contrasting worlds as Gee strove for acceptance by the Singhs, one wonders whether the capitalistic tendencies the author slowly disavowed represent the emotional truth of the period depicted here or are merely heightened for dramatic effect.

Gee provides interesting details on the changes in her outer world but not much depth or introspection on her inner growth.