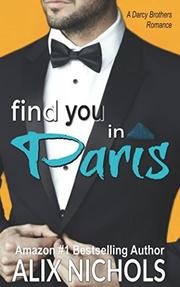 FIND YOU IN PARIS

From the The Darcy Brothers series, volume 1

A billionaire lures a grocery clerk into a false marriage for mysterious reasons.

In the opening of this romance, readers meet both Count Sebastian Darcy du Grand-Thouars de Saint-Maurice (“a stinking-rich aristocrat”) and the woman who loves to hate him, Diane Petit. Darcy is the proprietor of Parfums d’Arcy, the first name in French fragrance and the cause, Diane is certain, of her father’s ruin. Charles Petit had a small line of artisanal perfumes—excellent scents he developed himself—but Darcy drove him out of business. Seeking vengeance and denied an appointment at the young billionaire’s Paris office, Diane tracks him down to a reception and throws a cream cake in his face. He finds her “foxy” and starts scheming. He hires a private investigator to follow her, photograph her covertly, and learn more about what makes her tick. After surprising her at the supermarket where she works as a cashier, Darcy makes his pitch. “I’m prepared,” he explains, “to pay fifty thousand euros for a maximum of six months in a pretend relationship.” Why the sham marriage, the cash offer, the choice of Diane as co-conspirator? She’s shocked at first, but, after mulling it over mulled wine, she decides to use the proposal to her advantage: she’ll either part with him in six months (with money for her ailing father), or she’ll use the time to snoop through his personal things for damaging secrets. “I’m still a convinced socialist,” Diane reassures her audience, but the reader is not persuaded. Diane is awed by the wealth she encounters (the stately Château d’Arcy in Burgundy and the ancient Grotte d’Arcy nearby) and made jealous by the beautiful women in Darcy’s orbit. She finds herself attracted to him, and he to her. While Nichols (Playing with Fire, 2017, etc.) keeps the blithe tale moving swiftly, as the chapters alternate between Diane’s and Darcy’s points of view, the reader is occasionally at a momentary loss, wondering who is speaking. But the author infuses the appealing love story with diverting descriptions. Darcy’s charisma, Diane tells readers, “yes, dammit, charisma—envelops me in a soft, yummy-smelling cocoon and lifts me up.” A crime plot toward the end might have been more effective had it been foreshadowed, but this is a short novel written in the spirit of pure pleasure, and it delivers just that.

A lighthearted and satisfying romance in the world of French perfume.