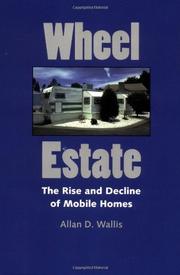 WHEEL ESTATE: The Rise and Decline of Mobile Homes

While the 60-year social and technological history of mobile homes may seem a subject of limited interest, Wallis (Environmental Design/Univ. of Colorado, Boulder) places it within the broader scope of architectural and cultural movements with such facility that he ""forces us to reconsider what we understand about the character of American housing."" Two processes, Wallis writes, ""have shaped the use, form, and meaning of the mobile home."" First, the design and growth as carried out by manufacturers and the innovations wrought by individual owners; second, the regulation and categorization by zoning boards, bankers, and insurance companies, which have effectively slowed the growth and tinged the social acceptability of ""trailer"" living. Wallis traces the origins of the modern mobile home to the auto camps of the 1920's, and surveys the wide variety--often homemade--of travel trailers, ""auto-tents,"" and campers, some of which evolved out of economic necessity, others from the desire for camping comfort and utility. Early commercial models included the Aerocar, the Covered Wagon, and the Expando, which featured pullout rooms. As Wallis discusses the 30's and 40's, he notes community and institutional resistance to what was perceived as cheap housing for an undesirable, transient underclass. However, when the War Department opened a plant in Ypsilanti, Mich., in 1941, more than 20,000 workers were housed in what came to be called ""manufactured housing."" Estimates are that the government had as many as 200,000 trailers in use during WW II. Today, Wallis notes, there are more than eight million mobile homes; they have comprised onequarter of new housing starts over the past 20 years. The author persuasively argues for the mobile home as ""an innovative housing alternative,"" based in part on the fact that they have ""become the predominant unsubsidized type of affordable housing in the United States."" Adroitly written, and offering intelligent, feasible solutions to a complicated, growing problem.