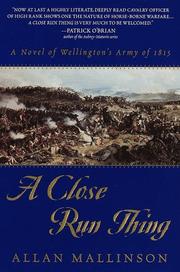 Pompous oafs, a sly heiress, and a beguiling nun prove just as challenging as battlefield perils to a British cornet who plays a decisive role in Wellington’s defeat of Napoleon. Mallinson, a British cavalry officer with an impressive knowledge of spontoons, snaffles, and other minor arcana of 19th- century combat, offers an extremely detailed, alternatively violent and romantic first novel in a land-based, sword-and-horseflesh companion to Patrick O’Brian’s seafaring Aubrey-Maturin series. Hero Matthew Hervey is 23 when we meet him in 1814, one year before Waterloo, on the battlefield in southern France. The highly educated, polyglot son of a parson with vague connections to royalty has just bravely slaughtered a French gunnery patrol, yet has made the mistake of embarrassing a superior officer, General “Black Jack” Slade. Sister Maria, a gorgeous Carmelite nun who’s the daughter of a French count, rebandages Hervey’s wounded leg, then entrusts him with her father’s ring and a pack of letters to deliver to her ancestral home. With Napoleon abdicating, and the delivery accomplished, Hervey returns to England, where Lady Henrietta Lindsay, an old childhood friend, teases him about matrimony with obscure references to Jane Austen novels. He moves with his regiment to Ireland, where he gets in trouble by defending kindly peasants against corrupt British land agents. Lady Henrietta uses her titled connections to save Hervey from Slade’s wrath just in time for the regiment to rush back to the Continent, where Hervey finds himself included in strategy-planning sessions with the stalwart Duke of Wellington, who sends him on a secret mission to contact Prussian forces. After this somewhat wooden, overly chatty adventure, Wellington appoints Hervey as his aide-de-camp, with another mission in store. Some saddle sores from Mallinson’s affection for 19th-century turns of phrase, but, on the whole, a rousing, chastely nostalgic tale of valiant heroism and dashing derring-do.