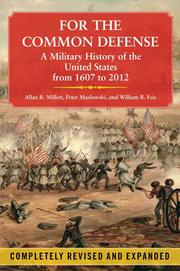 FOR THE COMMON DEFENSE

The third edition of this solid, comprehensive military history of the United States, first published in 1984, reworks the era from the Korean War onward and includes the requisite additions wrought by the “global war on terrorism.”

In this clearly structured, concisely written work, Millett (History/Univ. of New Orleans; The War for Korea, 1950-1951, 2010), Maslowski (History/Univ. of Nebraska; Armed with Cameras: The American Military Photographers of World War II, 1993, etc.) and Feis (History/Buena Vista Univ.; Grant's Secret Service, 2002, etc.) proceed chronologically, as the nation’s commitment to civilian control of military policy became more nationalized and competitive with internal growth. The authors move across a wide terrain, including coverage of the colonial militiamen, the forging of the “common defense” by the two branches of the government, legislative and executive, as specified under the Constitution, the country’s national expansion through the Civil War, birth of the American “empire” through the two world wars, and Korea, Vietnam, Afghanistan and Iraq. Maslowski has masterly reorganized coverage of the Korean War, which allowed the Truman administration to substitute victory for rearmament in a major way. The war also provided the “political context” for development of NATO and a more active military role in Asia. The authors are stern with President Reagan’s wild-spending “Star Wars” initiative and the “waste, fraud, and abuse in the procurement process”; with Clinton’s “avoiding war and inviting future conflicts”; and with George W. Bush’s inexperience and alarming staff of hawkish neoconservatives. The authors discuss technological innovations, policy and operations in depth, and they urge the Obama administration to manage a policy less dependent on the whims of “domestic politics” and more reliant on “expert advice from their civilian and military professionals.”

A work of fine research, peer review and precise, evenhanded writing that is standing the test of time.