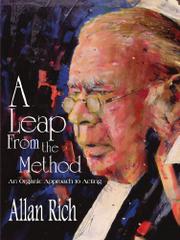 A LEAP FROM THE METHOD:

An Organic Approach to Acting

Rich, a Los Angeles personality with a long career in show business, re-envisions the actor’s craft, offering practical advice to those that aspire to the stage and screen. With short, vivid chapters, Rich succinctly dispels with the notion that performers must have a natural talent to succeed–plenty of hard work, a willingness to defer to the playwright and the courage to dig deep into a role to discover the central truth of a character will do in its absence. Rich pokes holes into Konstantin Stanislavsky’s psychological approach to acting that asks a performer to search for personal memories to add emotional resonance to a performance. He suggests instead that the actor must not reproduce, but reinterpret a role when playing it night after night. The basis of Rich’s new, simplified approach is the philosophy that an actor must search the text for insights into the character rather than rely on their own past experiences. To be economical on the stage and not rely on physical movement are also important elements to an effective performance, as is the discovery of the essence of the character’s behavior. Rich offers practical recommendations that run from knowing the entire play in order to understand the playwright’s intentions to never sleeping with your leading man or lady, lest the intensity of the stage romance be diminished. A quick autobiographical narrative kicks off this charming, informative manual. The author recounts his early Broadway appearances and the crisis of confidence that led to several lean years and a midlife career as a businessman and art dealer with an itch to return to the stage. Unfortunately, a last section filled with testimonials on the effectiveness of Rich’s method and gaudy plethora of celebrity photographs distract from the polish and professionalism established by the author’s instructive theories.

Great advice from a show-business veteran.