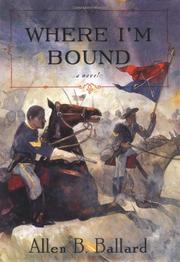 by Allen B. Ballard

The experiences of black soldiers during the Civil War, and the ordeal of a family victimized and fragmented by slavery, are the subjects in this well-researched and solidly written debut novel, by a respected teacher and historian (One More Day’s Journey, not reviewed, etc.).

As the War draws to its close, runaway slave Joe Duckett escapes from a Confederate prison camp and joins the Union Army as a scout, then is soon made sergeant in a Colored Cavalry troop. Meanwhile (and in parallel chapters throughout), Joe’s wife Zenobia, left behind on the Kenworthy plantation in Mississippi, plans to escape to freedom with her youngest children (the two eldest having been sold to another owner), aided by black field-boss Drayton, who not-so-secretly loves her. Ballard leans rather too heavily on melodramatic coincidence: people who in real life doubtless would never have seen one another again manage to keep meeting on various estates and battlefields (the most egregious such examples are Joe’s chance reunion with his oldest son Luke and his man-to-man combat with Colonel Richard Kenworthy). But the story is swiftly paced and filled with vivid incidents, many of which, as an Author’s Note explains, are indeed historical: the court-martial aboard ship (a steamboat carrying cotton to Vicksburg) of a racist civilian who had interfered with a black soldier on sentry duty; Zenobia’s flight by raft in pursuit of a Yankee boat, and her capture by “deserters and irregulars”; and a horrific scene in which the Union Army unleashes maddened bloodhounds against its foe. The narrative is further distinguished by crisp, credible dialogue and scrupulously fair and fascinating portrayals of the wide spectrum of relationships—many of them genuinely loving ones—between embattled, indignant Southerners and “their” blacks. And you won’t soon forget the haunting final scene.

One wishes Ballard Godspeed in his wisely chosen new career. This is a fine beginning to it.