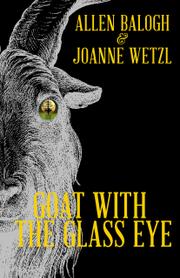 GOAT WITH THE GLASS EYE

In this second historical novel in the Black and Gold series, Balogh (Black Sails 1715, 2016) and Wetzl depict the trans-Atlantic slave trade in 1691 and the pirates that disrupt it.

Prosperous slavers are providing British-made goods to West African chieftains in exchange for kidnapped human beings to work in the fields of the British Caribbean and on North American colonies’ plantations. Business is booming, and Mobutu, a powerful African chieftain, makes a deal with merchant Edward Colston, offering him slaves in exchange for guns and ammunition. He kick-starts this agreement by betraying the people of his own village. Soon afterward, he performs a traditional ritual, slicing geometric patterns into the skin of his newborn son, Mobu; later, he slips out of the village, carrying Mobu with him in a sack. A mystical, local goat with an irregular eye that looks like glass, follows him onboard a British ship. Mobutu agrees to become Colston’s linguist during a voyage to the Caribbean, and he hands Mobu over to Wyla, a captured medicine woman from his own village. The complicated plotline covers several major events involving piracy and the slave trade between 1691 and 1730, and, although this is a work of fiction, many characters are based on real-life historical figures, including Mobutu. He and Wyla are the story’s main characters, but the authors provide a vast cast that populates several subplots, such as the poignant tale of a love affair between a white pirate-to-be named Black Sam Bellamy and 16-year old Maria Hallett, the sister of a Puritan preacher. The authors’ prose is consistently vibrant, as when it captures the intensity of Sam and Maria’s first meeting: “Her ice-blue eyes were drawn immediately to Sam’s dark-brown ones. At that moment, the pair became one.” Their portrayal of pirate society, while sometimes graphically violent, also reveals a surprising level of democracy, as the crew votes on all major decisions.

An action-packed, engaging, and informative tale.