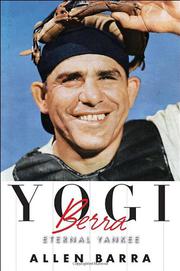 A full-scale biography of the most quoted and, possibly, the most underrated player in baseball history.

From the 1950s cartoon that ripped off his name to the Aflac commercials of recent years, Lawrence Peter “Yogi” Berra has had an identity and impact outside the game greater than all but Ruth, Robinson and Gehrig. A Depression-era child of Italian immigrants, Berra grew up (along with Joe Garagiola, who as a player and broadcaster would do much to burnish Berra’s folk-hero status) on “Dago Hill” in St. Louis with a strong set of values and a surprising certainty about his talent and worth as a player. His New York baseball career began in earnest after the war, and he quickly developed a reputation as a notorious bad-ball hitter and, eventually, a shrewd handler of pitchers. He only occasionally joined his hard-living Yankee teammates—Ford, Mantle, Martin—at Toots Shor’s joint or the Copacabana, preferring instead to go to the movies or attend to a growing list of product endorsements. While there are plenty of stories here to prove that Berra’s popular image is rooted in fact, Barra (The Last Coach: A Life of Paul “Bear” Bryant, 2005, etc.) reminds us how truly great a player Berra was—three-time American League MVP and ten-time World Series champion—and how smart a baseball man came disguised in his unlikely body. After his playing career, Berra coached and managed pennant-winning teams in each league. The play about him insists that Nobody Don’t Like Yogi, and while that’s not quite true—ask Willie Mays, Cleon Jones or Tom Seaver—for more than 60 years Berra has been a vital part of the game and a pop-culture icon. Now the worthy subject receives a serious biography that dignifies his baseball accomplishments and still manages to make us smile.