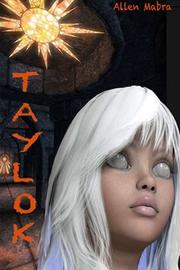 Mabra’s (Crys Delchant and the Stone of Life, 2011, etc.) latest fantasy tells the story of a young girl blinded in a sacrificial rite who must face a religious cult hoping to complete the sacrifice she escaped.

Taylok, of the Nehwisna, inhabitants of a cavern called Rockworld, shows promise with the sling at a young age. When she’s only 3, Taylok and her mother are taken away to be sacrificed for the crime of her mother’s leaving her abusive husband. Taylok is saved by her friend Flint but must cope with her loss of eyesight. Years later, a high priest and his warriors are still searching for Taylok, a crusade spearheaded by Pebblic, the girl’s father. This novel, a prequel to a series that also features Taylok and Rockworld, begins with a foreword that gives a rundown of the Nehwisna’s world. It’s in the style of a textbook, and though the language is bloodless, it conveniently explains unfamiliar terminology—“turn” is an hour; “isa” is a day—as well as tidbits such as the people’s currency of crystals and shells. The bulk of the novel is a more standard narrative featuring an inspired protagonist whose blindness is hardly a detriment: She has an enhanced sense of hearing, is still adept at the sling and seizes the upper hand when people underestimate her. The story stays mostly with Taylok, whose world is defined by what she feels and hears; someone who betrays her has a “traitorous voice,” and in possibly the book’s best moment, she “witnesses” a sword fight between Flint and another man by listening to the clanging of metal. Though darker and not quite as epic as other YA fantasies—the action here is largely confined to the Eldar Temple and a nearby village—several morally enriching scenes help round it out: Taylok realizes that blindness isn’t an excuse for dishonesty (i.e., stealing), and the peddling of an illegal hallucinogenic drug seems as undignified as human sacrifice.

A stirring, accessible tale that YA readers (and their parents) will enjoy.