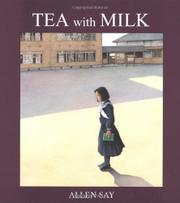 In describing how his parents met, Say continues to explore the ways that differing cultures can harmonize; raised near San Francisco and known as May everywhere except at home, where she is Masako, the child who will grow up to be Say’s mother becomes a misfit when her family moves back to Japan. Rebelling against attempts to force her into the mold of a traditional Japanese woman, she leaves for Osaka, finds work as a department store translator, and meets Joseph, a Chinese businessman who not only speaks English, but prefers tea with milk and sugar, and persuades her that “home isn’t a place or a building that’s ready-made or waiting for you, in America or anywhere else.” Painted with characteristic control and restraint, Say’s illustrations, largely portraits, begin with a sepia view of a sullen child in a kimono, gradually take on distinct, subdued color, and end with a formal shot of the smiling young couple in Western dress. A stately cousin to Ina R. Friedman’s How My Parents Learned To Eat (1984), also illustrated by Say. (Picture book. 7-9)