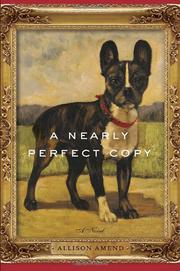 The third book by Amend (Stations West, 2010, etc.) is a fast-paced, lively novel of forgery.

Gabriel Connois is the Spanish-born relation of a prominent contemporary of Degas. A talented but rather cranky, mercurial personality, he occupies what is beginning to seem a permanent spot at the impoverished margins of the Paris art world—an outsiderdom that's exacerbated by the limitations of his French and by his uncompromising attitude toward the bourgeois art world. Meanwhile, in New York, Elmira “Elm” Howells holds a prestigious place at her family's artauction house. Elm's marriage is a bit chilly, and her career is languishing, in part since the auction house is now headed by a rather imperious and skeptical cousin but mainly sinceshe's been absolutely unstrung by grief after the death (vacation, tsunami) of her young son Ronan. Early in the book, Gabriel—a gifted copyist and mimic who owes his start in the art world to his perfect replica of a painting by his famous forebear that hung in his childhood house—gets tempted, bit by bit, into a scheme that seems simultaneously to lay waste to and to fulfill his ambitions...and Elm, too, is swept into the conspiracy, at the other end, by her desperation to replace the son she lost. Amend provides a fizzy, entertaining insider's look at the conjunction of visual art and commerce—especially the world of art auctions—and though the portrait of Elm's family life and a subplot about cloning (human analog of forgery) are less convincing and strain credulity, they don't detract too much from the charm and enjoyment provided by Amend's exploration of the ethics and the mechanics of the art world.

A few preposterous plot points, but overall, this is a quick, provocative and likable read.