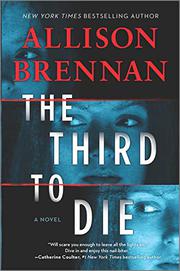 THE THIRD TO DIE

In Brennan’s (Nothing To Hide, 2019, etc.) new series launch, a hard-edged female LAPD undercover cop and an ambitious FBI special agent race to catch a serial killer before he strikes again.

On paid administrative leave since an incident with a suspect went wrong, a restless Detective Kara Quinn is on an early morning run in her hometown of Liberty Lake, Washington, when she discovers the flayed corpse of a young nurse. In D.C., FBI Special Agent in Charge Mathias Costa is staffing the new Mobile Response Team, designed to cover rural areas underserved by law enforcement, when his boss assigns Matt and analyst Ryder Kim to Liberty Lake. The notorious Triple Killer, who murders three random victims, three days apart, every three years, has returned. With only six days to identify and catch the culprit, and only three days until he kills again, the team is “on a very tight clock.” What should be on-the-edge-of-your-seat suspense turns into a slog marred by pedestrian prose (“she heard nothing except birds chirping…”), a convoluted plot slowed down by a focus on dull bureaucratic infighting, and flat character development. The sole exception is the vividly drawn Kara. Smart, angry, defensive, complicated, she fascinates both the reader and Matt ("Kara Quinn was different—and he couldn’t put his finger on why”).

Inside this bloated novel is a lean thriller starring a strong and damaged protagonist who's as compelling as Lisbeth Salander.