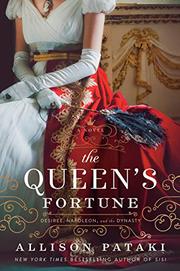 The rise of Napoleon as narrated by his first fiancee.

The Clary sisters, Desiree and Julie, daughters of a recently deceased Marseille merchant, are trying to rescue their brother from revolutionary prison when they encounter Joseph di Buonaparte. Entranced by Desiree’s beauty, Joseph uses his influence on the Clarys’ behalf. Joseph attempts to court Desiree, but he’s edged aside by Napoleon, who pledges marriage after toying with her affections. But as military ambitions increasingly preoccupy Napoleon, Desiree is supplanted by Josephine. Reluctantly, Desiree joins her sister, newly married to Joseph, in Paris. Not overjoyed that her jilter is now an in-law, she is too much the lady to show resentment, which may have served the historical Desiree but not so much the fictional character. When, early in the novel, she is admitted to Napoleon’s inner circle, Desiree ceases to be a protagonist and becomes a passive, if acute, observer. Her proximity to the Little Corporal has some benefits—her marriage to Bernadotte, Bonaparte’s most trusted general, brings not only love, but riches. Although the politics and contradictions of Napoleon’s success, as seen through Desiree’s eyes, are riveting, this is well-traveled ground. Desiree’s point of view is too nonjudgmental to bring to the fore the ironies attendant on the trajectory of an impoverished Corsican who uses the revolution as a platform to exceed the excesses of the deposed and beheaded Bourbons. Likewise, the struggles of Josephine, who captivates Napoleon in part due to her age and experience and then displeases him for the same reasons, are related by Desiree with no particular insights to distinguish this treatment from the many more direct portrayals of the empress. Pataki’s ability to flesh out imperial grandeur and foibles with telling detail, on full display in her Habsburg novels (Sisi, 2016, etc.), is equally evident here; however the dramatic demands of a novel are not met.

All that is known of the historical Desiree is that she was a bystander—unfortunately, she remains so here.

BEAUTY IN THE BROKEN PLACES
by Allison Pataki
Fiction

WHERE THE LIGHT FALLS
by Allison Pataki
Fiction

THE TRAITOR'S WIFE
by Allison Pataki

THE SECRET LIFE OF JOSEPHINE
by Carolly Erickson
Newsletter sign-up