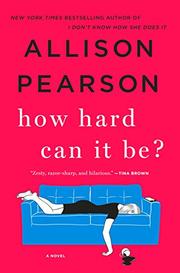 HOW HARD CAN IT BE?

Seven years have passed since London financial executive Kate Reddy found what seemed the perfect balance of family and work in Pearson’s popular I Don’t Know How She Does It (2002).

Those years have not been kind. Since Kate left her high-powered position to move to the countryside with her family, her formerly adorable kids have grown into bratty teens. Ben is a typically noncommunicative 14-year-old; more alarmingly, in trying to keep up with the popular mean-girl crowd, 16-year-old Emily recently took a “belfie”—selfie of her naked backside—which has gone viral. Kate’s husband, Richard, once appealing and supportive, has become a bicycle fanatic with no time for his family. Laid off from his architectural firm, he has been retraining to become a counselor, yammering about mindfulness while Kate supports them all with part-time financial consulting gigs (and also manages Richard’s ailing parents). Urgently short of money, the Reddys have recently relocated to an impractical fixer-upper in “Commuterland” as Kate begins searching for a job back in London. Meanwhile, her 50th birthday, complete with perimenopause, looms. Like the other job-seeking women in her "returners" support group, she quickly learns that age and experience are not assets in the marketplace. Ironically, she ends up back at her old firm, which has changed name and ownership; fortunately, there's no one left who remembers her, since she has to prove her competence in a temporary position while pretending to be an acceptably youthful 42 with help from “lunchtime lipo.” Kate proves herself indispensable, of course. She also reconnects with rich American dreamboat Jack, to whom she did not succumb years ago out of apparently misplaced loyalty to Richard. A caring mother, sister, daughter, and daughter-in-law, Kate thrives because she is smarter, wittier, prettier, and more competent than everyone else. She is also self-congratulatory, even when supposedly self-deprecating, and merciless to her enemies, even one encountered in the waiting room of a therapy center for self-harming teens.

An aspirational fantasy in which the heroine not only survives, but flourishes through every crisis known to middle-age women in the higher income brackets.