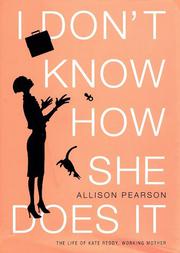 I DON’T KNOW HOW SHE DOES IT

An above-average addition to the crowded genre of working-mother-angst novels, a first from British journalist Pearson, the mate of New Yorker film critic Anthony Lane.

Written largely as diary entries by London career woman and mother Kate Reddy, the tale begins at 1:37 one morning as Kate, disdainful of stay-at-home moms but intimidated by their homemaking skills, alters store-bought pies to pass off as homemade at her daughter’s school the next day. Kate, whose high-powered job as a funds manager requires long hours and lots of travel abroad, rarely sleeps, but for all her manic activity she spends little time with the children she claims to adore. Readers may feel less than sympathetic with her complaints about husband Richard, a mild-mannered architect actively involved with the children, or about her nanny who doesn’t always follow Kate’s strict rules, mostly set in absentia, concerning the kids’ nutrition. Kate’s major crises are about finding cabs to the airport and keeping up with the men in her firm. Though she’s filled with guilt and self-pity about lack of involvement with her children, she seems to spend most of her free time writing cutesy e-mails to her friends, who are also career women, and splurging on shoes. Then her life begins to spin out of control. She almost has an affair with a client; her boss’s wife, a truly good woman, dies of cancer; Richard gets fed up and moves out; she smokes dope with her cab driver, who turns out to be a philosophy student. She finds her priorities shifting. The clever cattiness of the early chapters gives way to an earnest, endearing introspection that makes it possible for Kate to strike a more satisfying, if almost too-perfect-to-believe, balance between family and work.

From the upper echelons of working mothers, a fictional answer to The Nanny Diaries—and likely to be as popular.