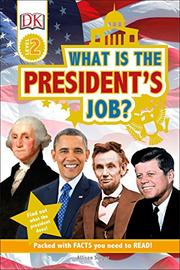 WHAT IS THE PRESIDENT'S JOB?

A starter volume for newly independent readers curious about what presidents of the U.S. are supposed to do.

Singer presents both the basic responsibilities—meeting foreign leaders, working with Congress to pass laws, being in charge of the armed forces that “keep Americans safe”—and steady rounds of public appearances and speeches. She also lays out presidential qualifications (the Constitutional sort, anyway: “You must be at least 35 years old. No kids allowed!”), explains how election campaigns and voting work, and offers quick tours of Washington, D.C., and the White House. Ronald Reagan, John F. Kennedy, and a few other presidents from the distant past make cameos, but most of the big, bright photos feature Barack Obama and his immediate predecessors. A quiz and an invitation to presidential wannabes to answer the question “What would you do for the country?” close this presidential primer.

A sunny opener for more-nuanced overviews like Judith St. George and David Small’s classic So You Want to Be President (2000) or the newest edition of Eyewitness: Presidents (2017).