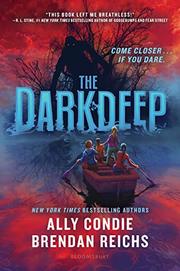 From the Darkdeep series, volume 1

When Nico falls over a cliff into Still Cove, he surfaces in a cave that leads to an ancient houseboat. After his friends Tyler, Emma, and Opal come to rescue him, they investigate the elaborately furnished, abandoned boat and discover a spiral staircase down to a shadowy, whirling water portal the kids call the Darkdeep. When Emma experimentally touches the water, she is swallowed up, only to be regurgitated minutes later. This strange process releases familiar apparitions, or figments, seemingly plucked from their childhood memories, that all four kids can see. The foursome can’t seem to stop jumping through the Darkdeep to see what apparitions they can conjure up, including Smurfs, Godzilla, Minions, an extraterrestrial Visitor, and various other imaginary creatures. Inevitably, these beings take on more solid form, become violent, and, for an unknown reason, leave Still Cove and head for town. These shenanigans play out against a backdrop of the town’s economic distress after timber-industry layoffs; subplots include Opal’s needy desire for male attention, the enduring enmity of the school bully, and the upcoming radish festival. Too many storylines dilute any sense of intrigue. Characters are identified by salient features—Tyler’s dark skin, Opal’s long, black hair, Emma’s blue eyes—a device that does not disrupt the white default.

A weak plot, underdeveloped characters, and the hint of a next book sum up this not-so-deep series opener.