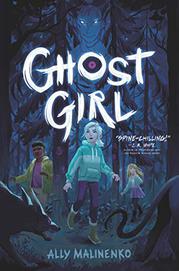 A girl who delights in the macabre harnesses her inherited supernatural ability.

It’s not just her stark white hair that makes 11-year-old Zee Puckett stand out in nowheresville Knobb’s Ferry. She’s a storyteller, a Mary Shelley fangirl, and is being raised by her 21-year-old high school dropout sister while their father looks for work upstate (cue the wayward glances from the affluent demography). Don’t pity her, because Zee doesn’t acquiesce to snobbery, bullying, or pretty much anything that confronts her. But a dog with bleeding eyes in a cemetery gives her pause—momentarily—because the beast is just the tip of the wicked that has this way come to town. Time to get some help from ghosts. The creepy supernatural current continues throughout, intermingled with very real forays into bullying (Zee won’t stand for it or for the notion that good girls need to act nice), body positivity, socio-economic status and social hierarchy, and mental health. This debut from a promising writer involves a navigation of caste systems, self-esteem, and villainy that exists in an interesting world with intriguing characters, but they receive a flat, two-dimensional treatment that ultimately makes the book feel like one is learning a ho-hum lesson in morality. Zee is presumably White (as is her rich-girl nemesis–cum-comrade, Nellie). Her best friend, Elijah, is cued as Black. Warning: this just might spurn frenzied requests for Frankenstein.

A didactic blueprint disguised as a supernatural treasure map.