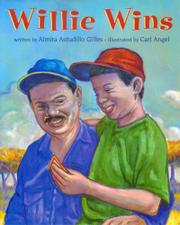 A tender but vital tribute to a father's love and a son's faith, as well as a gratifying sleeve across a bully's windpipe, from a talented newcomer. Willie, a young Filipino boy, must bring a bank to class for saving the play money his teacher will be handing out for extra work. His father gives him an alkansiya—a coconut-shell bank from the Philippines—but Willie worries that Stan, the class bad boy, will give him grief about it, just as he has been teasing him for striking out at baseball. "Plus, there's something special inside," his father says. So Willie puts up with Stan's jeers ("That's a loser's bank. It's ugly, and I'll bet it's empty, too") while nonetheless he harbors a trace of fear that his father's surprise will be something silly or that "only Dad thought was special, like the wooden water buffalo he kept on his desk." Willie works likes the dickens over the month and when it comes time to crack open the bank, not only has he earned the most money, but the special treasure inside the bank turns out to be very special indeed. An understated pearl of a story, humbly and somewhat awkwardly illustrated in deep-colored acrylics, with two affecting characterizations and an exemplary bond of love. (Picture book. 4-7)