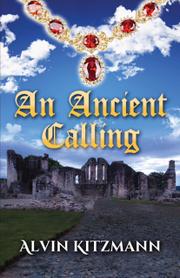 Kitzmann’s historical novel charts the journey of a precious Scottish heirloom across the ages.

On her 16th birthday, Marian receives an ancient wooden box left her by her parents. The box contains a pair of antique earrings, a knife, and a letter detailing her long Scottish lineage. The hurried opening of the novel charts Marian’s formative years, education, and marriage as well as the beginning of her career as an archaeologist. After planning a much-needed vacation to Scotland, Ian, her husband, whose family also has Scottish roots, begins to dream about the Scottish Lady Christian, sister of Sir Robert the Bruce, who fought in a battle against the English. During the flight to Edinbrugh, Ian dreams of Marian’s earrings and a matching necklace. Despite being a doctor and man of science, Ian unquestioningly accepts that the dreams are a message from Marian’s ancestors, and the couple plans to locate the jewelry. The author digresses regularly, and the drawn-out background provided for Peavey, an English solider and minor character, is but one example of unnecessary padding. Such digressions drain energy, and along with a reliance on implausible coincidences, the novel quickly becomes a boggy read. The Scottish dialogue also has an unhealthy dose of “Aye,” “Och,” and “mo cridhe.” In general, language tends toward the melodramatic: “ ‘Each night, I want you to look up at that star, the one that the heavens spin around. Do you see it?’ She nodded. ‘That’s my girl. Each night that you do, will you pray for me?’ ” Nevertheless, the scope of the novel is undeniably impressive, tacking its storyline to a broad and accurate framework of historical research. Those with even a vague interest in Scottish history will find enjoyment here, although many will balk at this overly romanticized representation of “Scottishness.”

A well-researched but contrived debut.