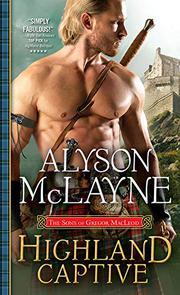 A broken and angry Highland warrior must deal with the woman who raised his stolen son.

When she was 15, Deirdre MacIntyre’s heartless family married her off to a man whose benign neglect left her feeling unwanted, insecure, and lonely. When he gave her a beautiful baby, saying the boy was his son, she found her life’s purpose in loving and raising little Ewan. A rare excursion to the spring gathering of the western Highland clans brings Deirdre face to face with Ewan’s furious widower father: Laird Gavin MacKinnon, a tough warrior from a prosperous, powerful clan. Gavin searched tirelessly for Ewan after he went missing, and as the days dragged into weeks and years, "he'd changed, become hardened and cruel, imbibed too much and raged at the world." When he finally finds Ewan with Deirdre, he takes them captive, intending to send her away as soon as they are safely back at his castle. Little does Gavin anticipate the unbreakable bond between mother and adopted son. An abundance of the words “doona” and “lassie” aside, the tone is very modern, but the importance of kinship to 15th-century Scottish identity shines through in the warmth, humor, and occasional tough love among Gavin’s kin. In the background of Deirdre and Gavin's slow-burn romance are the political consequences of Ewan’s kidnapping and the mystery of Deirdre’s missing husband. McLayne (Highland Betrayal, 2018, etc.) perfectly balances the raw emotions and pent-up desire at the heart of the romance with the thrilling swordplay and castle intrigue readers expect from their Scottish historical romances.

Deeply touching love story between a fierce leader and the timid woman who finds her own strength by standing up to him.