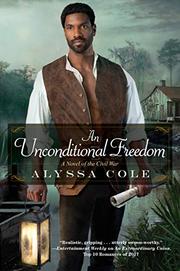 The third book in Cole’s (A Duke by Default, 2018, etc.) Civil War–era Loyal League series pairs a broken man bent on retribution with an inexperienced but courageous double agent.

Daniel Cumberland was born free in Massachusetts, but his education and professional status did not protect him from being kidnapped and sold into slavery, an experience that destroyed his faith in God, country, and himself even after he's rescued. At night, memories of his time in captivity haunt him, but by day he is a detective with the Loyal League, one of the North’s most important spy rings. Daniel is ruthless and heartless, motivated by an all-consuming thirst for vengeance that sets him apart even from his fellow spies, with their naïve optimism that the war can bring about a better life for people of all races. Janeta Sanchez had lived a pampered and privileged life as the daughter of a Cuban plantation owner who had settled in Florida. But when Yankee soldiers imprison her father and quarter themselves in her home, she agrees to travel to Ohio to infiltrate the Loyal League and spy for the Confederate cause. In unfamiliar terrain, where others' perceptions clash with her self-image, Janeta “was coming to understand both her place in this country and her own inner geography better; she was recharting the map of herself.” Cole conveys the ways Janeta’s and Daniel’s layered identities pose challenges while affording them strengths of insight and character. Cole weaves a tense and gripping plot into a tapestry of fascinating and authentic historical detail, told from the distinct perspectives of people of color, without skimping on the growing feelings and strong desires that bring two lovers together.

Forbidden attraction and the threat of betrayal are the initial hooks for what turns out to be a sumptuously written and meticulously researched tale of a country at war with itself and two damaged people who find themselves in each other’s arms.