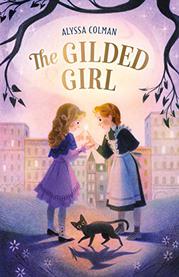 A young magician learns about social justice the hard way.

Twelve-year-old Emma Harris is the new girl at posh Miss Posterity’s Academy for Practical Magic, where she will learn to kindle, a complicated process in which elite girls undergo a Kindling Ceremony to harness their magical abilities. The setting is early-1900s Manhattan, with a twist—the wealthy have powers that give them all they need or desire while the poor are snuffed, or deprived of their magic. Emma, whose Mama is dead, has a close bond with her Papa, a brilliant magitect whose high expectations she hopes to live up to. When disaster strikes, Emma is summarily deprived of her wealthy trappings and forced into servitude by the mercenary, two-faced Miss Posterity. Determined to avoid the workhouse, Emma buckles down and is befriended by the school maid, Izzy O’Donnell. Aided by house dragon Figgy, the girls hatch a plot to kindle themselves and escape. Emma’s true personality comes to the fore in extremis, and she learns compassion for others, regardless of class. With plenty of drama and heroic rescues, this fantasy holds a lot of appeal for magic-loving readers, including fun touches like bland food that becomes delicious with the touch of a crystal and rooms that move around, Hogwarts style. Main characters are White; some secondary characters reflect the diversity of New York City.

Fast-paced and warmhearted with a satisfying conclusion.