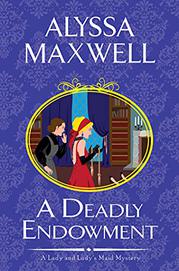 Now that World War I has upended the assumption of the English aristocracy, Phoebe Renshaw of Foxwood Hall has convinced her conservative grandparents, Lord and Lady Wroxly, to give house tours in the hope of boosting their faltering bottom line. The first tour group consists of village schoolchildren and members of the Greater Gloucestershire Historical Society. Lady Phoebe and Eva Huntford, her maid and confidante, soon find it difficult to keep the group together and are annoyed by snarky comments and people slipping away. When putative historical society author Arvina Bell is found strangled in the library, the lazy chief inspector ends up arresting her son, but Phoebe and Eva, who’ve had much experience of murder, are far from convinced that he’s the guilty party. Luckily, Eva’s boyfriend, constable Miles Brannock, is on their side when the murder of another historical society member confirms their suspicion that some sleuthing is in order. After a picture is stolen from the house and Phoebe’s Grams is attacked, Phoebe wonders how much she should credit rumors that a treasure’s been hidden in Foxwood Hall. Questioning members of the historical society reveals that all is not well among the group, and many secrets emerge—but which of them is worth killing for?

Beneath all the red herrings is an appealingly perceptive look at England between the wars.