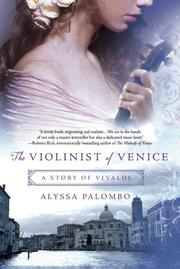 THE VIOLINIST OF VENICE

A wealthy young Venetian woman secretly studies violin with Vivaldi, leading to an illicit love affair and a completely different life than she expected.

Adriana d’Amato wants nothing more than to study the violin, though her father, a wealthy merchant, has forbidden it. Going against his wishes, Adriana begins lessons with the famous musician Antonio Vivaldi, who has recently been dismissed from his position at the Conservatorio dell’Ospedale della Pietà and finds the talented student’s fees welcome. But studying together makes it clear that they share a passion for music and the violin, which grows into a passion for each other. Problematic, since Adriana’s father expects her to make a good marriage to a prominent family, and Vivaldi is a priest. The affair heats up, aided by a family servant devoted to Adriana and the decadence of Venice during Carnival, but while Adriana hopes for happy-ever-after with her lover, real life encroaches. A young nobleman wants to marry her, but just as the engagement is about to be announced, she discovers she’s pregnant, enraging her father into a brutal temper and uncovering a family secret that will haunt and protect her for years to come. She is forced to give up her first child and her love, since news of their affair will only ruin them both and he would have no way to support her. She accepts the hand of an older man with whom she forges a decent life, but as the years pass, notes from her youth will take hold again in surprising ways. Debut author and musician Palombo creates a lovely fictional account of a great love affair for Vivaldi, though most of the intensity of the book lies in the first half, and while we are interested in the rest of Adriana’s life, we don’t feel as emotionally vested.

A nicely crafted first effort that reimagines Vivaldi’s life in a bittersweet narrative.