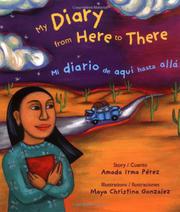 In an autobiographical outing written in English and Spanish, Amada tells her diary all about her fear of moving from her home in Juárez, Mexico, to not only a new town, but also a new country. Fortunately, she has a father who understands her trepidation and he tells her that as a child, he too had to make a similar move in reverse. Still, the trip is fraught with anxiety, especially since once they arrive in Mexicali, another border town, Papá will leave for Los Angeles to look for work. Once she arrives at her grandmother’s, she’s surrounded by helpful family members, her uncles telling jokes, doing magic tricks, and doing favors. Then she hears from her father who is picking in the fields of Delano, California. His news is not encouraging, but one day, he sends their green cards and they get set to leave for California. The diary follows them on their journey, until they reach Los Angeles and she closes with the news that Papá has found a better job. Filling her story with the details of this watershed in her life, Pérez captures the essence of the trauma of moving to a new place that is universal to all children, but here it is expanded by the facts of her immigrant experience. Gonzalez, who teamed with Pérez on My Room (not reviewed), packs her lively pages with vibrant, jewel-toned color and vivid images, illuminating the text and adding the richness of the culture. A nice touch is the back of the book jacket, which is a map of the area, showing the route from Amada’s old home to the new one. Pérez has plainly remembered her grandmother’s advice: “Keep your language and culture alive in your diary and in your heart.” Very nicely done. (Picture book. 5-9)