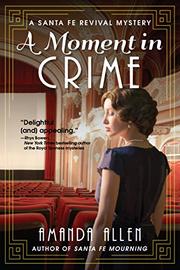 A MOMENT IN CRIME

A New York socialite must do everything in her power to save her cousin from a murder charge.

Maddie Vaughn-Alwin and her cousin Gwen grew up together, both members of the socially prominent Astor family, neither inclined to follow society’s strict rules. The year 1922 finds Maddie, a talented artist, living in Santa Fe, where she’s recovering from the death of her husband with the help of her new love, Englishman Dr. David Cole. At an opening at the Museum of Fine Arts, Maddie’s surprised to see her childhood neighbor Will Royle and even more surprised to see Gwen, who suddenly appears frail and proclaims that she’s in trouble. Gwen has a part in a cowboy picture directed by the infamous Luther Bishop and starring his stunning wife, Bridget, and she admits to Maddie that she had a brief affair with Bishop, whose promises of marriage and fame came to nothing. Because Gwen and Royle, who’s working on the screenplay, are so heavily invested in the project, Maddie is drawn into the strange and exciting life of the moviemakers, whom she finds both fascinating and distasteful. While on the set, she discovers the body of Bishop dangling from the rafters, apparently hanged. The scene is certainly shocking, but something about it also strikes her as false. Inspector Sadler, with whom Maddie’s crossed swords before (Santa Fe Mourning, 2018), soon realizes that his suspects include nearly everyone connected to the movie, since Bishop antagonized and bullied everyone. Sadler arrests Gwen, but both Maddie and Cole know that no woman could have done the deed alone; the killer must be either a man or a man and woman working together. Whoever it is doesn’t like Maddie’s sleuthing and sends her threatening messages, but Maddie won’t give up as long as Gwen’s in jail.

Allen perfectly captures the serene enchantment of Santa Fe. Her gutsy heroine has plenty to work with in a mystery that keeps you guessing to the end.