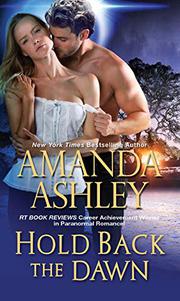 HOLD BACK THE DAWN

A vampire living a quiet country life saves a young woman and battles an old foe.

Centuries-old vampire Roan Cabrera lives as an unthreatening gentleman in a small English village in 1867. Rather than hunt and kill his prey, Roan quenches his thirst by feeding off hospital patients, lulling them into complacency by showing them the happiest minutes of their lives. Roan can read minds, turn into a wolf, and will himself anywhere; but disappointingly, the only nod Ashley (Twilight Desires, 2018, etc.) makes toward worldbuilding is labeling Roan’s special skills as “vampire magic.” Enter Kathryn Winterbourne, a young woman who fled her home after unwanted attention from her abusive stepfather. Kathryn is struggling to make it on her own when she is hit by a carriage and left for dead. After finding her, Roan feels an unexpected flare of attraction and decides to save her life. From there, the plot takes several inexplicable turns. Roan moves Kathryn into his home and hires a driver for her, but she never wonders what he might expect in exchange. Meanwhile, Roan realizes Pascual, a fellow vampire and old enemy, is hunting villagers in his territory. Roan actively searches for Pascual while Kathryn placidly whiles her days away reading, gardening, and ignoring her suspicions about why Roan only appears at night. The romance between them is dull and listless. Kathryn is a thinly developed character without agency, existing to be a love interest for Roan and a pawn for Pascual. The plot chugs along relentlessly, but no matter how dramatic the problem, Roan effortlessly solves it. The end result is that both Roan and Kathryn are strangely static characters; they say they’re in love but readers won’t be convinced.

Conflict without character development leads to an unconvincing romance.