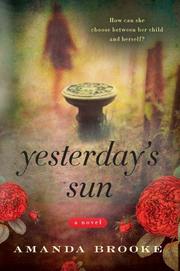 Brooke’s novel, set in the countryside near London, captures the heartbreaking dilemma of a woman who must choose between saving her own life and that of her unborn child.

Holly is an artist who spent her childhood longing to get away from her parents—a drunken, abusive mother and a distant, uninvolved father. Once both are dead and she is on her own, she meets the man of her dreams, Tom, a television journalist from a close-knit family. When they purchase the gatehouse of a large, burned-down estate, Tom tries to talk Holly into starting a family. She isn’t sure about becoming a mother, especially when her own was so terrible, but slowly starts to consider his proposition when she has an otherworldly encounter with what turns out to be an ancient “moondial” in the couple’s garden. In this encounter, Holly sees the daughter she will have and learns she will also die delivering her. After meeting and befriending Jocelyn, who once lived with her own family in the same house, Holly discovers that the older woman has had a similar experience with the mysterious stone. Confiding in Jocelyn, Holly discovers her dilemma is even worse. Holly knows she must find a way around the moonstone’s death sentence or she will never live to see her precious baby. Although the plot shows promise and creativity, and Brooke delivers a solid yet fanciful storyline, the overall execution is clumsy. The book is riddled with clichés: Holly, Tom, Jocelyn and the rest of the book’s characters never simply say anything; in Brooke’s world, they gurgle, they beam, they gush, they whisper, they sob and they wink, while wading through buckets of adverbs and torrents of sugary dialogue.

The innovative, quirky plot and author’s old-fashioned overwrought style will appeal to some readers, but others will find the syrupy prose overwhelming and wish the book had been subjected to a more strenuous edit.