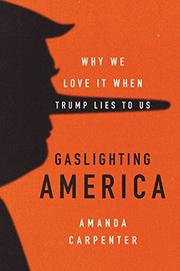 Why We Love It When Trump Lies to Us

A conservative pundit tries to analyze and predict the bad behavior of the sitting president.

Carpenter (The Vast Right-Wing Conspiracy's Dossier on Hillary Rodham Clinton, 2006) is a former staffer to Republicans Jim DeMint and Ted Cruz, a staple on CNN, and, as she notes on her Twitter bio, “conservative, not a party cheerleader.” The author uses her media knowledge and keen insight to try to apply some logic to the ghastly conduct of Donald Trump. Her preferred label is “gaslighting,” a once-antiquated term for a specific form of manipulation intended to make a targeted group question their memory, perception, and sanity. Carpenter outlines the steps in Trump’s approach, which include taking a strong (if often ill-considered) stance on a hot-button political issue or scandal, casting the issue into the public realm (“People say…”), creating suspense (“We’ll see or you’ll find out”), discrediting the opponent (“Sad!”), and declaring victory. The author then applies this logic to a variety of Trump targets: Cruz, Jeb Bush, the media, women, and even Carpenter herself, who got the gaslighting treatment from the candidate on live TV. That’s not to mention the candidate’s treatment of his opponent Hillary Clinton, which turned out to be a bulletproof way to attack her through a strategy heavily reliant on a willingness to lie at will and an absolute lack of shame. Carpenter’s analysis is clearly written and thankfully light on partisan politics, and she offers concise and proactive advice for both citizens and candidates on how to “fireproof” themselves against the president’s gaslighting. Toward the end, Carpenter comes to some depressing conclusions: “There is no way, short of a straitjacket, ball gag, and padded room, that Trump is giving up the power and influence he has gained since becoming president.”

A patriot’s guide to parsing the president’s lies and disinformation.