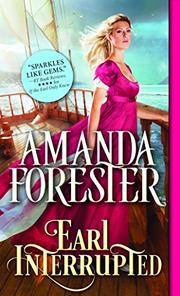 An abduction on land leads to a wedding at sea.

In 1811, there are only a few acceptable ways for a young unmarried woman to meet an earl, and taking off his pants in order to remove a bullet from his side is definitely not one of them. And yet, that’s how Emma St. James meets Capt. Robert Ashton, also known as the Earl of Darington but most commonly known as the Pirate Earl. For him, it’s love at first sight, and he begins planning a proposal before he has his trousers back on. Emma is already engaged, however, and was on her way to America to meet her fiance before she and Darington were each beset by highway robbers. Avoiding the outlaws who are looking for them, the two of them head to Greystone Hall, Darington’s childhood home, and from there, readers of If the Earl Only Knew (2016) will recognize the house party they find themselves in the midst of. That gathering ended in marriage for Lady Kate and the Earl of Wynbrook, but Emma’s betrothal and the appearance of pirate rivals make this love story much more complicated. The second volume of Forester’s Daring Marriage duo starts with a privateer battle and maintains a suitably high level of suspense throughout. Emma is a devout Christian who relies on Bible verses for comfort throughout her adventure, and the passionate moments between her and Darington are correspondingly tame on the page, but their chemistry is so strong that even readers who like their romances on the spicy side won’t mind.