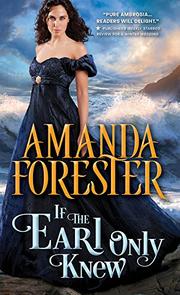 IF THE EARL ONLY KNEW

An earl’s sister lives in isolation after a difficult childhood until a friend of her brother’s helps her overcome her bitterness.

Forester (The Highlander’s Bride, 2015) returns with the first book in her new Regency series, The Daring Marriages. Lady Katherine Ashton has come back to England after a long absence. She and her twin brother, Robert, the Earl of Darington, have recovered from their childhood penury and become quite wealthy, thanks to Kate’s financial acumen and Robert’s daring career as a privateer for the English crown. When they meet with a group of investors to repay them for helping finance Robert’s sailing career, Kate is dismayed to find that a certain investor has appeared in person to collect his money. John Arlington, the Earl of Wynbrook, had a steamy encounter with Kate the last time she was in England. Now years of hardship and loneliness have taken their toll. Kate is a grim, unhappy woman, dressed in severe black because masquerading as a widow makes it easier to avoid drawing attention to herself. Although Kate and Robert would like to keep to themselves, a series of mishaps soon makes it clear that they’re being pursued by an unknown enemy. They’re forced to accept the help of the Arlington family, which means Kate and John have to reckon with their past and figure out how to get along. The book is a dramatic tale of debtors prison, kidnapping, gunshot wounds, and runaway maidens. The story is well-paced and absorbing, the characters complicated and likable, and the prose straightforward and clear.

While the heroine’s transformation in a few short weeks is just a bit too extreme to be believable, the book is well-written and most readers will be entertained.