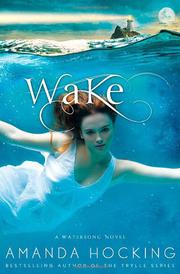 From the Watersong series, volume 1

In self-publishing phenom Hocking’s (Ascend, 2012) disappointing foray into new paranormal territory, one night of partying on the beach leaves 16-year-old Gemma with more than a hangover.

When the initial fog of her late night at the cove with a trio of sirens (more frequently, and unimaginatively, referred to as “weird pretty girls”) wears off, Gemma discovers that she is stronger, faster and more beautiful than ever. (Readers might have found this transformation more compelling if Gemma weren’t already strong and beautiful, also graceful and endowed with honey-colored eyes.) Now she just has to choose between the life she loves and the lure of her newfound mythical powers. The question is, will readers care? The “should I stay or should I go” tension at the heart of the story would be a lot more effective if the ties that bind Gemma's broken family together were more fully developed. Her father is practically nonexistent. Her mother, mentally impaired and incapable of taking care of anyone, including herself, lives in an assisted-care facility. The only constant is Gemma’s older sister Harper, whose need to look out for her feels more like an obsessive yearning for control than real emotion. In the end, it’s secondary characters, like the girls’ love interests, who will sustain readers determined to make it to the final page.

Whether they'll feel motivated to pick up the next three books is anyone's guess.