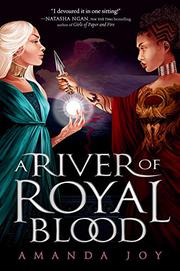 A RIVER OF ROYAL BLOOD

From the River of Royal Blood series, volume 1

Princess Evalina Killeen attempts to tap into her magical abilities in preparation for a magical showdown.

Eva has always known she was born with the feared magick of marrow and blood which she is supposed to use in a fight to the death with her sister, Isa, for the queendom once they both come of age. But Eva’s only accessed her magic twice, and both times its violence frightened her. Mere months before her nameday, Eva is desperately searching for a magick teacher when she stumbles across Baccha, a fey of immense power who shares her magical abilities. Though Eva is often empathetic, she’s sometimes whiny, and her lack of awareness and acknowledgement of her own privilege—and complete obliviousness toward other people’s needs—may irritate readers. However, as she learns to access her magic and begins uncovering family secrets, she also continues to grapple with the current and historical bias (species, not color, based) of Myre, whose diverse population is made up of humans, fey, bloodkin, and khimaer. Her willingness to question the status quo may help readers forgive her for being otherwise self-centered and sometimes rash. A surprising twist and multiple unsolved mysteries will leave readers looking forward to the next book. Black-haired Eva is biracial (her father is brown-skinned while her mother has light pink skin) while Isa has golden hair and lighter brown skin. Supporting characters are racially diverse.