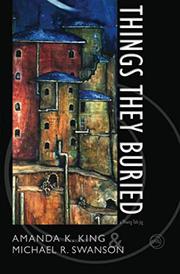 From the A Thung Toh Jig series, volume 1

Aliara and Sylandair had gotten out, or at least they thought they had. They were once slaves, but after their master, Kluuta Orono, apparently died in a catastrophic explosion, they escaped and never looked back. Now, in 2084, they’ve built a life for themselves, trading on their wit, skill, and clout in the atoll of Dockhaven. When rumors of the survival of their former owner reach their ears, they have little choice but to investigate for themselves. Meanwhile, in the ramshackle port city, there’s a constant buzz of tragedy; in particular, children have been disappearing. After the pair’s investigation turns up evidence of the cause of these disappearances, it soon becomes clear that something far darker is afoot. In this novel, the city of Dockhaven and the world of Ismae are nearly characters themselves, and the authors introduce a variety of unfamiliar humanoid species, such as the scaly draas and the imposing karju, as part of the complex setting as well as a nuanced mix of magic and science. The worldbuilding is nearly flawless in its execution, which will entice readers to immerse themselves in the story and acclimate themselves to its strangeness as they go. The novel also strikes a chord with its characterization; Aliara and Sylandair are shown to be very much in love, but they’re unscrupulous toward most anyone else and willing to lie to, steal from, or sacrifice others when necessary. They’re extremely confident and skilled but also deeply scarred by their trauma at Orono’s hands, and they remember those experiences as they go about their daily lives. Meanwhile, Schmalch, a not-so-trustworthy thief for hire, offers an outsider’s perspective on the main pair as well as welcome comic relief. The intriguing plot makes excellent use of its primary characters, resulting in a breathtaking, harmonious read.

An empathetic, complex, and offbeat tale.