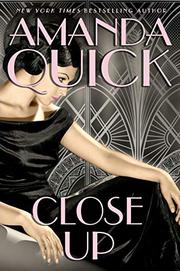 Quick returns to 1930s California (Tightrope, 2019, etc.) with another sexy but derivative thriller.

After refusing to marry the man her wealthy parents favored, fiercely independent Vivian Brazier moved from San Francisco to Adelina Beach to pursue her career as an art photographer. Her mother and sister, Lyra, who becomes engaged to Vivian’s reject, send her gifts, but her father has cut off support, so she does studio portraits and freelance photojournalism to support herself. Studying her own photos surrounding the murder of Hollywood star Clara Carstairs by the Dagger Killer leads her to believe the perp is a photographer, and her tip to the police puts them on the right path. But a chance to sell her work at Fenella Penfield’s gallery falls through, and Vivian is stunned when she uses her sixth sense to learn that Fenella is furious over Vivian’s photos of nude men. Meantime, Nick Sundridge, who works with his dog, Rex, as a private eye, is striving to harness his strange fever dreams to help his investigations. After Vivian’s narrow escape from the Dagger Killer, Nick arrives to warn her that she’s marked for death by a hired killer. He’s an emissary for Luther Pell, who is an old wartime friend of his uncle's and who runs a nightclub in Burning Cove and has connections to the FBI and other government agencies. Nick convinces Vivian that he can protect her by posing as her assistant while trying to find the killer whose coded journal of poems contains the names of his victims and the methods he’s used to kill them. Escaping when the killer tries to burn them alive, Nick and Vivian (and Rex) move to the Burning Cove Hotel, where they set a trap for their quarry while the flame of their attraction burns brighter.