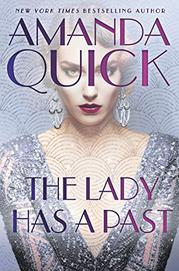 THE LADY HAS A PAST

The world of luxury hides nefarious secrets in this latest installment in the Burning Cove series.

Lyra Brazier’s new job as an apprentice investigator is off to a wild start. Her first client interview turns into a murder scene, and, shortly after, her boss, Raina Kirk, goes missing. Lyra isn’t sure if investigating is for her, but she’s determined to at least solve this mystery. She won’t be on her own, though. Antiquarian book dealer Simon Cage is sent by nightclub owner Luther Pell, Raina’s lover, to assist Lyra. Lyra and Simon pose as newlyweds at Raina’s last presumed whereabouts, a hotel with an exclusive spa where rumors and dark secrets abound. Simon’s ability to sense emotions tied to objects has been a great asset in other crime-related cases and comes in handy here, too. As the pair draw closer to tying clues together, though, they risk making themselves the next targets. Mystery and action drive this novel, but it’s also a solid romance—and a double one at that. Simon and Lyra embark on a fling and develop deeper feelings while Luther and Raina’s relationship is explored as well. Some of the heavy topics lack emotional heft, but this allows the narrative to maintain its quick, light tone. The touch of paranormal blends in seamlessly. Reminiscent of an old-school whodunit, fitting with the 1930s setting, this story is chock full of deceit, secret pasts, red herrings, lively banter, exciting sleuthing, and power-hungry baddies.