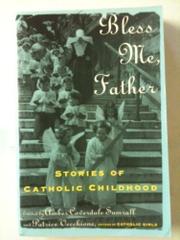 Poignant, funny, and reflective fictional recollections of Catholic childhoods, assembled by the editors of Catholic Girls (1992). Very few of these 54 stories and poems are disappointing—an accomplishment in so large a collection. Most authors are contributors to literary magazines; some, like Louise Erdrich and Michael Dorris, are better known. The stories cover many of the expected themes: the strict injunctions against sins of the flesh, the imponderable mysteries of the Church, the legacy of guilt, and the intellectual rebellion that often resulted. For example, in David Kowalczyk's ``Sinner'' an eight-year-old boy, confused by his teacher's embarrassed explanation of violations of the Sixth Commandment, confesses to a bemused priest that he has committed adultery 87 times. ``Sin'' by John Van Kirk delineates the feelings of an adolescent fearfully confessing the sin of masturbation. Able to repent but unable to reform, he sees below him ``the burning lava flow of Hell, and he could feel himself sliding toward it.'' On the other hand, Lucille Clifton's poem ``Far Memory'' recalls ``the sisters singing/at matins, their sweet music/the voice of the universe at peace.'' In Mary Ellis's wonderful story, ``Wings,'' a sensitive nine-year-old boy composes letters to his teenage brother in Vietnam; writing about his drunken father and overwhelmed mother, he implies his pain and his love while also experiencing magical dreams of joy and salvation. ``Impurity'' by Robert Clark Young takes a boy from a sadistic nun in the first grade to a sexy lay teacher whose ``dirty little secret'' is that she's a Methodist, to the sanctimonious priest who is ultimately exposed as a con man who romanced vulnerable widows and took their money. These authors are—often despite themselves—intoxicated by the elixir of their early, enveloping Catholicism. Recovering or practicing Catholics will experience a tingle of recognition; general readers should enjoy the consistent level of craftsmanship and emotional honesty.