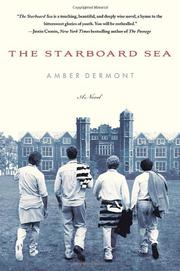 Blessed with a stunning oceanfront view and populated by an assortment of screw-ups from America’s wealthiest families, Bellingham is Jason Prosper’s last chance. At least it is if—like the other men in his very rich family—he wants to attend Princeton. Still mourning the loss of his best friend, Cal, who hung himself at their previous boarding school, Jason struggles with considerable guilt. The boys were sailing partners and secret lovers, and Cal died after a falling out between the two. Ambivalent about even getting on the water without Cal, Jason quits the Bellingham sailing team after almost drowning a fellow student, Race, during a training exercise. He instead fixates on Aidan, a fragile redhead from California who the other boys have taken to calling “Hester” in reference to The Scarlet Letter. Aidan, who has reason to believe she might be the illegitimate daughter of movie star Robert Mitchum, has plenty of issues of her own, but she responds well to Jason’s kindness and the two begin a fledgling romance. But after a hurricane, she goes missing, and is found dead of an assumed suicide. Sensing that she would not have taken her own life, Jason attempts to retrace her last night—leading to several harsh discoveries and considerable soul-searching of his own dark heart (and ambiguous sexuality). Meanwhile, Jason’s estranged parents and shady financier older brother provide minimal emotional support. Set against the backdrop of the 1987 stock-market collapse, Dermont’s confident debut novel almost works as a swan song for a lost gilded age. But her insular, sociopathic characters and emotionally removed 18-year-old narrator do little to engender sympathy—or interest.