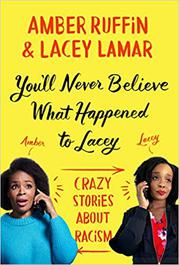 Comedy writer Ruffin recounts the endless indignities involved in being a Black woman in America, with her older sister as foil.

The Ruffin sisters grew up with a mother who “has a bad case of the smarts…and…isn’t fond of people messing with her children”—messing that comes daily from the White residents of Omaha, Nebraska, a city, Ruffin reminds us, that may sound like Hicksville, USA, but is larger than New Orleans, Pittsburgh, and Minneapolis. Those White citizens think nothing of using the N-word, nor of touching Black women’s hair, nor of assuming that the Black residents of Omaha are violent and thievish. The latter assumptions build in ways that the sisters find sometimes amusing, sometimes hurtful, always astonishingly awful. Lamar—who remained in Omaha while Ruffin moved to New York, where she writes for Late Night With Seth Meyers—recounts a trip to a store when a friend asked about the cost of a Rolex on display. Told “expensive,” her friend replied, “Bitch, I’ll take two.” Lamar got the same response when she asked about a coffee table and then was floored when the manager informed her of the hardly shattering price tag of $200. Some indignities are nearly inexplicable: One man tried an online come-on with a Confederate flag as backdrop; an elementary school teacher attributed slavery to keeping-up-with-the-Joneses peer pressure. “The reaction always varies because you can only put up with what you can put up with when you can put up with it,” writes Ruffin. “And here’s a little reminder that we shouldn’t have to put up with this shit AT ALL!” Most of the time, the sisters’ reactions are a kind of knowing exasperation. “We are not into trying to educate white America, but maybe we accidentally did,” they conclude. The education is no accident, and White readers can certainly use the wake-up call.

Both maddening and funny, an eye-opening look at how its daily targets cope with racism.