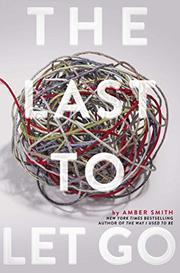 THE LAST TO LET GO

A white teenage girl tries to keep her family together after her mother murders her abusive father in this sophomore effort by Smith.

After high school junior Brooke’s mother stabs her father to death in their apartment, Brooke and her younger sister, Callie, are forced to move in with her mom’s best friend, Jackie. Flashbacks reveal that Brooke’s father has physically abused her mother and also her older brother, Aaron, who now lives with his girlfriend after attempting suicide, for years. Callie was witness to the murder and has gone mute. Brooke convinces Jackie to allow the siblings to live together again in the apartment while their mom awaits trial in hopes that it will help Callie. But when this arrangement begins to fall apart, Brooke tries to make it on her own by lying to everyone, including Dani, the biracial girl she’s falling in love with. Brooke’s tightly focused first-person narration leaves little room for Smith to flesh out secondary characters or explain their motivations. Dialogue between Brooke and her mother is frustratingly vague, never revealing exactly what happened between Brooke’s parents that last day. All this leads to a climax that falls flat because the boilerplate emotional stakes lack any real specificity. Save for Indian/white Dani, the primary cast appears to be white.

Ultimately unsatisfying despite its explosive opening.