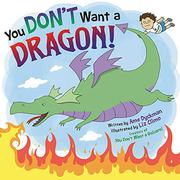 YOU DON'T WANT A DRAGON!

If you thought having a unicorn as a pet was hard, you haven’t seen anything until you’ve tried owning a dragon.

The young protagonist of You Don’t Want a Unicorn! (2017) is back, and they clearly haven’t learned their lesson. Now they’ve wished for a pet dragon. As the intrusive narrator is quick to point out, everything about it seems fun at the beginning. However, it’s not long before the doglike dragon starts chasing squirrels, drooling, pooping (ever wondered where charcoal comes from?), scooting its butt across the floor (leaving fire and flames behind), and more. By now, the dragon has grown too huge to keep, so the child (who appears white and also to live alone) wishes it away and settles for a cute little hamster instead. A perfect pet…until it finds a stray magical cupcake. Simple cartoon art and a surfeit of jokes about defecation suggest this book will find an appreciative audience. The dragon/dog equivalences are cute on an initial read, but they may not be strong enough to convince anyone to return. Moreover, a surprising amount of the plot hinges on having read the previous book in this series (it’s the only way readers will know that cupcakes are unicorn poop).

Feels like a retread—it may be time to put this series to bed.