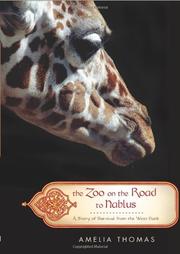 THE ZOO ON THE ROAD TO NABLUS

A Story of Survival from the West Bank

British journalist Thomas debuts with a fraught portrait of the Municipal Zoo of Qalqilya, the last surviving zoo in Palestine.

Visionary veterinarian Sami Khader is the eccentric focal point of the narrative. From September 2005 to May 2007 (the period covered here), Khader repeatedly risked death by shooting to break curfew and feed animals on the verge of starvation in a war-torn zoo approximately 40 miles from Jerusalem. But the animals inevitably began to perish: Four zebras died during a tear-gas attack, an ostrich expired from shrapnel and a beloved giraffe struck his head when startled by machine-gun fire. (Khader eventually became a taxidermist in the hopes of at least preserving these casualties of war.) Thomas balances the sadness of the animals’ suffering with tales of the small improvements and minor triumphs of the zoo staff in their quest to become recognized as a National Zoo. A scant description of the complicated Israeli-Palestinian conflict can be found in the first few pages, but the author gives only vague descriptions of political conflict and war in the remainder of the text, even when events affect main characters. She misses a tremendous opportunity to provide an accessible lens through which to view the bloody and complicated history of the West Bank. Thomas also never manages to completely embrace what should be one of her book’s most important themes: the irony of a fascination with the animal kingdom that has led human beings to capture and contain animals for centuries, and the horrible price paid by these particular animals for that fascination.

Intriguing and moving, though disappointingly incomplete.