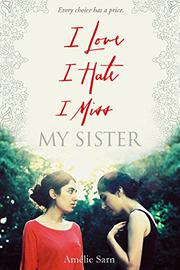 I LOVE I HATE I MISS MY SISTER

A teen grapples with both her own identity and the role identity played in her sister’s death in this French import.

It’s been one year since Muslim Sohane’s younger sister, Djelila, was burned alive by religious extremists in their apartment building in the projects. She recounts the incidents leading up to Djelila’s death, using present tense to place readers directly in the scenes and past tense as she recalls what happened from her current state of grief. Sohane and Djelila remain fierce allies, but Sohane questioningly (and sometimes jealously) notices that her sister has started to break away from their family’s Muslim traditions by sporting tight clothes and drinking alcohol. She, on the other hand, explores her religious and feminist beliefs (“Is it possible to be a woman and Muslim at the same time?”) by wearing the hijab. Both sisters’ actions are noticed immediately. Djelila becomes a source of contempt by a Taliban-like gang, while Sohane is expelled from high school for wearing a headscarf thanks to a French law that requires strict separation of church and state. The story, based on actual events, never becomes a question of whether Sohane should wear her headscarf but ruminates on how young people cope with being siblings, second-generation immigrants, feminists and believers. Rather than overwhelming the narration, these themes twine together powerfully.